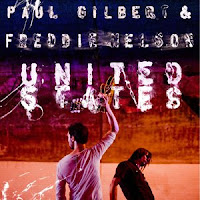 Take Freddie Nelson (Too Tall Jones) and Paul Gilbert (Racer X, Mr. Big) - mix and shake them up and out spits one sparkling release titled UNITED STATES. UNITED STATES is a collection of well crafted songs that are spit, polished, and shined to perfection.

When this cd arrived at my doorstep, I looked at the cover and knew right away that this cd was going to be something special. Why you ask? Well...not only because Paul Gilbert shows up, but because Paul shares the spotlight with Freddie Nelson - both of whom cut their teeth in the South West PA and South East Ohio music scenes. I've let this cd sink in for a few weeks now and in the meantime have been reading some early reviews on UNITED STATES. Needless to say, I'm a little disappointed that in nearly every review or interview I've read the one big question is "Who is Freddie Nelson?". I partially blame this on the internet age - there is simply too many bands or musicians out there and it's way too much for any one person to digest. I first came across Freddie and his band Too Tall Jones back in 2001 gracing the stage of the Varsity Club in Youngstown, Ohio. Too Tall Jones released a brilliant cd called BI-POLAR that was chock full of catchy power pop rock songs that's stayed in a pretty good rotation with myself since then. What Too Tall Jones showed me was that Freddie Nelson knew how to write some good power pop rock songs full of hooks and melody - and most importantly his songs have stuck with me for a few years now. That's a recipe for success in my book.

With Freddie's musical influence in mind, in comes Paul Gilbert's stellar guitar playing. (I'm not going to go into details of Paul Gilbert's history because anyone who is a music fan should know him by now. If not, shame on you!) That's a pretty damn good formula for some good songs. Together they can take a song to another level. Maybe another angle to look at it is that you can have a well written song, but if the players aren't up to par the end result would be a song that comes out flat or average and makes the song nothing more than a throw away track. It wouldn't have that "Added X" ingredient. With Gilbert and Nelson you get that "Added X" ingredient which is the icing on the cake.

With it's jackhammer/thumping beat during the verses, the opening track "The Last Rock and Roll Star" is an adrenalin rush that gets the blood pumping. Killer guitar solo on this one as well. "Hideaway" has a swaggering or swaying feel to it. Mid tempo song that is driven home by the vocal delivery. "Waste of Time" - good rock song that sees Freddie Nelson delivering his vocals in the Freddie Mercury zone - a few select higher range lines might have you thinking along the lines of something that The Darkness might have done. Don't confuse this song as a Darkness clone song though - I just wanted to highlight those few lines here and there to give you an idea of the high range of Freddie's voice. "Bad Times Good" is a flat out foot tapping pop song. No bells and whistles here - just a good strait beat. Simple and good. "Paris Hilton Look-Alike" is a melodic song that's full of harmony. Slower tempo, but has that head bobbing beat to it. Kind of a song that I would describe as "in the goove". "Pulsar" is a hard hitting song with some funky guitar work. The funk gets funkier on the intro and breaks on "Girl From Omaha". Stretch a rubber band across your fingers plug into a distortion box and give it a few fast plucks. That's the funky sound I'm trying to describe here. That quickly gives way to a jumping song with a pop flavor to it.

It's pretty tough to break down each individual song and trying to touch on everything in each song. There are a number of elements though that are strong with each song that carries through the whole disc. One is the guitar playing. Great rhythm work and great solos are numerous on here, which makes the music catchy. As I said above, Freddie has a unique style of singing that I like and that's featured throughout the disc as well. I think what I like most about his style is that he doesn't have the same delivery throughout a song. One moment he may be singing a melody line, another moment he might be one step below shouting, and then another part he might have a rapid fire approach - almost like a song is a book and each little segment where he changes it up is a chapter within that book. Bottom line is that's what creates a lot of the hooks on here. They catch your ear and that's the name of the game.

I'm glad I stumbled across Too Tall Jones years ago. That laid a nice foundation in advance of UNITED STATES so I somewhat knew what I was getting before I heard it. I described Too Tall Jones as catchy power pop rock songs and that's what you get with Gilbert & Nelson's UNITED STATES. I get a real heavy influence of Freddie Nelson on UNITED STATES. For sake of comparison...and nothing against Paul Gilbert because his guitar work shines on this disc.....I would say this leans a little more to sounding like a Too Tall Jones disc and little less of any Paul Gilbert's previous band recordings. At any rate, it's pretty damn good and that's the bottom line. There must have been something in the water around the Pittsburgh, PA area when Paul and Freddie grew up because it's pretty obvious they know how to write a good song. Classic rock and late 80's rock fans will eat this up. Modern rock fans might want to give it a test drive as well. I think UNITED STATES may rise above the never ending onslaught of new releases and grow some legs to stand atop the pack as one of the best releases of 2009 - maybe not a number 1, but definately should enter the minds of people when looking back at the best releases of 2009. Definately pick add UNITED STATES to your collection and don't hesitate to dig into both Paul Gilbert's and Freddie Nelson's back catalog.

You can pick up your copy of UNITED STATES right here at Amazon!