American Dog - All Over the Road Vol. One DVD 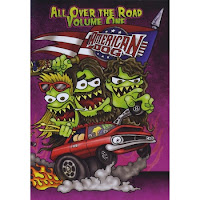 Sir-Loin-O-Beef. He's angry. He's mad. He's pissed...and he's a cummin' to guide you through the fine art of quenching your thirst and the bowels of rock and roll debauchery. What has made Sir-Loin-O-Beef's tampon string light up like a firecracker on the 4th of July? Why it's that good old "little band that could" out of Columbus, OH called American Dog. That's who! As always, they've delivered the goods ... lifted their leg and gave us another Golden spray upon our ears and eyes to mark their ever solid territory!

Sir-Loin-O-Beef serves as your host as he guides you through a 2 hour visual journey through the world of American Dog. Rose colored glasses be damned. In his eyes, he doesn't like the Dog and he tries his best to steer you clear of any danger the band might provoke.

So what doesn't he like about the band? It's more like...what is there to NOT like about the band? What you get here is a pretty comprehensive visual history of the band including rare live performances, videos, outtakes, and good times all around. All the hits are here from "Shitkicker", "Drank Too Much" to some more rarely performed songs like "Bullshit Goddammit" and "Be a Man" - the latter performed in the early days of the band at the legendary Alrosa-Villa in Columbus, Ohio. You also get a performance from a television appearance the band did in Paris, France as well as some live songs from across the big pond. Eric Moore of the Godz and Jason McMaster of Dangerous Toys stop by for a couple of cameo appearances on the dvd and you also get 3 videos the band has shot - "Workin' Man", "Rock-N-Roll Dog", and "Sometimes You Eat The Pussy". Keep yours eyes open for that last video as things aren't always what they seem. Great video! Meow.

If you want some bang for your buck, grab yourself a cold one and settle in for a 2 hour ride of non stop high octane entertainment from one of the most underrated bands in the world. This is way better than a night out at the movies or buying that new dvd movie that just came out. Well worth your hard earned cash and it goes to support a great band. Even Sir-Loin-O-Beef can't be denied the good times that emit from an American Dog experience. In the end, Sir-Loin-O-Beef is sporting yellow colored glasses and is gleefully dancing in the Golden rain of American Dog!

I've said it before and I'll say it again...American Dog is one of my favorite bands out there. Southern Blues Beer soaked Hard Rock at it's finest. If you never heard of the band, I highly recommend any of their cd releases as well as their new dvd ALL OVER THE ROAD VOL. 1. Head on over to www.americandog.us and pick up the new dvd and/or a cd or two and support real (and most importantly) good rock and roll! I promise you will not be disappointed.
Posted by Mydenrocks at 7:16 AM No comments: Links to this post